Concerts in the Konzerthaus Vienna
of the Vienna Hofburg Orchester

The Vienna Hofburg Orchestra performs a number of Strauss and Mozart concerts every year in the Mozart Hall of the Konzerthaus in Vienna.

Since the concert hall was opened in 1913 with the “Festive Prelude for Orchestra and Organ” by Richard Strauss it is one of the most traditional venues for music in Vienna.
The concert halls are famous for their excellent acoustics, and every accent of Viennese cultural life is present there, from classical music to jazz.

The Konzerthaus in Vienna is not only the venue for world premieres and premieres of important works of classical music but also many musical festivals, such as the Wiener Festwochen.

The Mozart Saal (Mozart Hall) is the second largest hall in the Vienna Konzerthaus and combines tradition with modernity.

With its 704 seats, divided into balcony and ground floor, it gives a classical concert both casual intimacy and the necessary space for a unique musical experience. 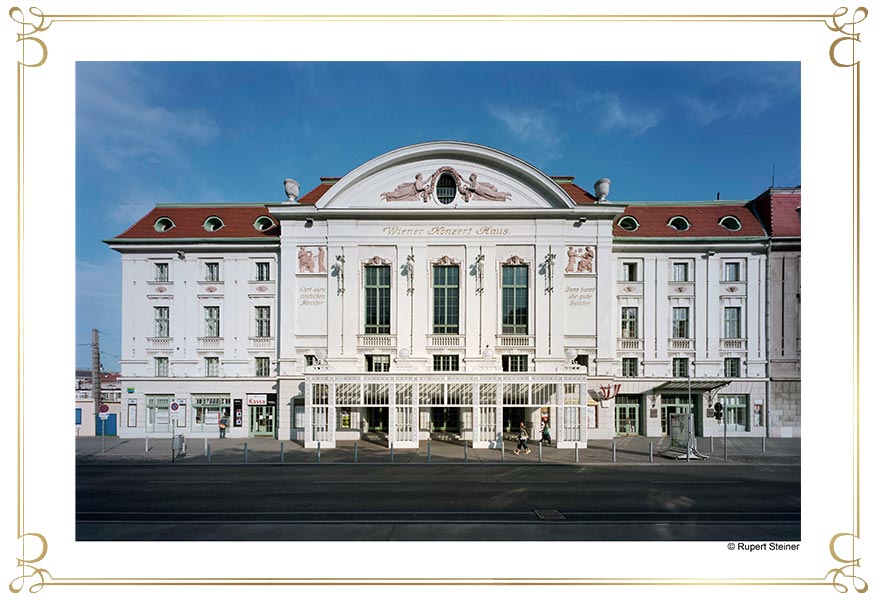 History of the Wiener Konzerthaus

In 1890, the notion of a future building to host musical festivals emerged and the idea was to create a new multi-purpose building that should be more appealing to the broader public than the traditional Vienna Musikverein.

Architect Ludwig Baumann had the first idea: His “Olympion“ should hold concert halls, an ice skating rink, and bicycle clubs, and also include an open-air arena for an audience of 40,000. This specific plan was abandoned but the general notion remained, and the construction of the Konzerthaus began in December of 1911.

The same Ludwig Baumann, together with famous theatre architect Ferdinand Fellner and Hermann Gottlieb Helmer, designed the building so that performances in the three large halls (Great Hall, Mozart Hall and Schubert Hall) can take place simultaneously without disturbing each other.

From the very beginning the Wiener Konzerthaus’ cultural purpose and artistic mission was clear: «To be a place for cultivating fine music, a staging area for artistic endeavors, and to be a house for music and a house for Vienna. »

It was in this spirit that the Konzerthaus celebrated its opening on October 19 in 1913 with a festive concert in the presence of Emperor Franz Joseph I. Richard Strauss wrote his «Festival Prelude opus 61» for this special occasion, the performance was followed by Ludwig van Beethoven’s 9th Symphony.

This kind of program –combining a contemporary piece and a masterpiece from the past – was to become exemplary for the Vienna Konzerthaus: the agenda of cultivating tradition and at the same time supporting innovations has become the foundation of the Konzerthaus’ musical world and forms its artistic identity.

Between the World Wars

Social upheavals and financial crises between the two World Wars have significantly shaped the Konzerthaus’ artistic profile and also led to a versatility in regards to its cultural offering, which from the present perspective has proven to be groundbreaking.

In addition to the constant cultivation of the classical repertoire the programs in the 1920s and 30s featured significant premiers, Jazz and popular music concerts, literature readings by famous writers, psychic lectures, expressive dance performances, symposia, conventions, as well as fencing and box world championships.

In the years between 1938 and 1945 the Vienna Konzerthaus suffered from cultural depletion. Under the destructive pressure of the national socialist dictatorship the Konzerthaus became a location abused for propaganda and Nazi entertainment and was largely deprived of its central cultural content.

After World War II the Konzerthaus played an important role in revitalizing and renewing the Austrian musical life. It rapidly became a leading organizer of modern music performances in Austria and was much in demand for international Jazz events in Vienna.

Events fathered by the Konzerthaus have set significant standards in Vienna’s culture. Old music, Jazz and modern music have become important components of the Konzerthaus’ program and complement is the primary artistic focus – classical music in its traditional abundance.

The Vienna Konzerthaus’ unique atmosphere does not only attract international music artists, but also serves as a popular location for other social events such as balls, conventions, dinners, company presentations and parties. The famed Konzerthaus’ service at events has a long tradition going back to the twenties, whereas the broad range of programs and performances definitely point to the future.

Due to the extensive reconstruction measures between 1998 and 2001 the time-honored building is equipped to meet the challenges of the third century.

How do I get to the Wiener Konzerthaus?

If you arrive by car, there is a paid parking garage at Schwarzenbergplatz 5, 1030 Vienna. From there you walk about 250 meters to the concert hall.

of the Vienna Hofburg Orchestra

Here you will find all concerts of the Vienna Hofburg Orchestra that take place in Vienna Konzerthaus.